Context for the Report
The California High-Speed Rail Authority’s predecessor agency, the California High-Speed Rail Commission, had found the Altamont route (the I-580 Corridor) to have higher ridership, lower environmental impacts and lower construction costs than the Pacheco Route. Nonetheless, for the last ten years, the Authority’s choice for connecting the Central Valley to the Bay Area has been the Pacheco Route. The Authority did not even evaluate the Altamont Route in its 2005 Statewide Program EIR. Legal pressure forced the Authority to compare the two routes in its 2008 Program EIR, which was overturned after a challenge by TRANSDEF and its allies. As a result, the Authority was choosing which route its trains would take in getting from the Central Valley to the Bay Area. (The Alternatives Analysis process then underway assumed the Pacheco Route, but that work could be made irrelevant if the Altamont were chosen instead.)

Environmentalists, transit advocates, and people who want High-Speed Rail to succeed economically all prefer the Altamont Route because it:
• Avoids the Grasslands Ecological Area, California’s largest fresh water wetlands complex;
• Avoids inducing new sprawl in Santa Clara and Merced Counties;
• Provides attractive rail service linking the Bay Area, Stockton, and Sacramento, with most trips taking less than an hour;
• Addresses highway congestion on Interstates 80, 880, 580, and 680;
• Adds mobility between the Bay Area and the northern San Joaquin Valley;
• Generates much higher ridership than the Pacheco Route, because it serves the East Bay and the northern San Joaquin Valley, with 2 million more residents within 10 miles of stations.

TRANSDEF has long been a supporter of High Speed Rail (HSR) over the Altamont Pass into the San Francisco Bay Area. This route makes tremendous sense from the standpoint of cost-effective regional transportation planning. The two interregional connections most in need of additional transit capacity are the Bay Area-to-Central Valley and the Bay Area-to-Sacramento routes. The Altamont alignment (orange on the map below) would provide the infrastructure for both of these key connections, essentially for free. 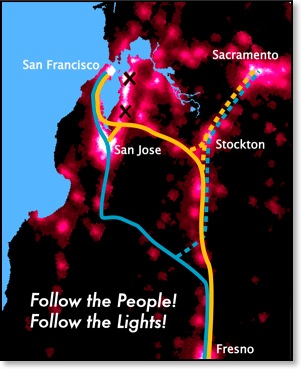 The Pacheco alignment (blue on the map) would provide no additional public benefits for our region, doing nothing for congested corridors. In controversial actions, the Pacheco alignment has nonetheless been recommended by both MTC and the High Speed Rail Authority staff.

On April 26, 2010, TRANSDEF along with its allies the California Rail Foundation and the Planning and Conservation League, filed comments on the Revised Draft EIR for the Bay Area to Central Valley segment of the California High-Speed Rail project. Our coalition, which also included the Town of Atherton, the City of Menlo Park and the Bay Rail Alliance, had succeeded in 2009 in getting the court to throw out the previous Final EIR for this project as inadequate. This Revised Draft EIR was intended to fix the legal deficiencies in the previous EIR, while preserving the Authority’s ability to again choose the Pacheco Route as its preferred Alternative.

The expert reports attached to our coalition’s comment letter were intended to legally force the Authority to give an objective review to the Altamont Alternative, something the Authority had refused to do for more than ten years. In particular, one of the reports found the Altamont route technically feasible, thereby preventing the Authority from using the legal tricks it employed in the past to avoid objective consideration of Altamont.

Expert Report on New Altamont Route
The Setec Ferroviaire consultant team, with long experience designing and managing construction of high-speed rail lines in France, found that “The Altamont route will provide an improved rail corridor between the northern San Joaquin Valley and the Bay Area to support passenger service between the Bay Area, the Tri-Valley area, and the Northern San Joaquin Valley. In addition, this route will offer a travel alternative that is competitive with the travel costs and time of auto, intercity bus and regional air modes. … For the operation of a high-speed rail service, the route through Altamont has many more advantages than the Pacheco plan.” Exhibit C, the report by Setec Ferroviaire, identifies an Altamont Corridor route they found superior to the Pacheco route:

Altamont Corridor Rail Project
Despite the decision by the Authority to proceed with the Pacheco route, a project to study the Altamont route was funded. It proceeded to an Preliminary Alternatives Analysis, with Appendices. The project included a variation on the Setec Alignment discussed above, which seemed to have the best combination of low impacts and high speeds. During the study process, the project produced two outstanding newsletters, 2009 and 2011, the latter of which beautifully describes a project the Bay Area desperately needs. The Train Riders Association of California later presented its proposal to several rail agencies on how to best implement the Altamont Corridor Rail Project.